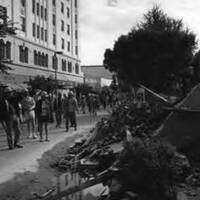 The 6.9 magnitude earthquake that rocked the greater Bay Area in 1989 is known to many simply as the San Francisco earthquake.

Come explore this VizWall exhibit of the Santa Cruz area.

Open to the public during Digital Scholarship Commons hours.