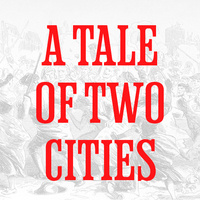 A Tale of Two Cities:

A Tale of Two Cities is an 1859 historical novel by Charles Dickens, set in London and Paris before and during the French Revolution. The novel tells the story of the French Doctor Manette, his 18-year-long imprisonment in the Bastille in Paris, and his release to live in London with his daughter Lucie whom he had never met. The story is set against the conditions that led up to the French Revolution and the Reign of Terror.
Its central themes–cultural and historical difference, the nature of political revolution and change, the identity and narration of the self, sacrifice, secrecy heroism–find expression through an often weird or gothic concern with bodies and their doubles, split identities, and the uncertain boundaries of life and death.

Join Wayne Batten and the Santa Cruz Dickens Fellowship for a series of discussions about Dickens's most enduring–and shortest!–novels.

Register for the discussions: https://ucsc.zoom.us/meeting/register/tJAlf-2grz4uEt1RjM7zGZ9slBJBaE3NxjMD