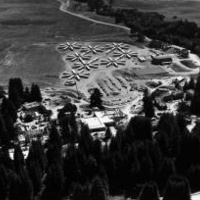 In the visions that shaped the campus, an extraordinary physical site was linked with an innovative educational project. The exhibition, originally presented last spring at the Mary Porter Sesnon Gallery at Porter College, traces decisive moments in the early creation of UCSC's built environment. It describes paths taken and not taken in the first decades of campus development--decisions, constraints, hopes, realities--and it celebrates the achievement of UCSC's founding planners while analyzing the tensions and contradictions they built into the campus. Through many transformations, the university that took shape in rugged and forested terrain atop a high hill remains a unique and inspiring place.