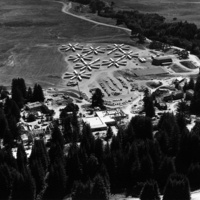 An exhibition exploring the transformation of a spectacular natural site into the one of the most cherished university campuses in the world.

Since 2011, Professors Emeriti James Clifford, Michael Cowan, Virginia Jansen and Campus Architect Emeritus Frank Zwart (Cowell '71) have been investigating the early history of UC Santa Cruz as a built environment, from four distinct perspectives. Neither a natural history, an institutional history, nor a purely architectural history, their project focuses on place making, and on architecture as a broadly interactive process.

How did the ensemble of sites, structures, and environments that is the UC Santa Cruz campus take shape? How has this special place been sustained and transformed through changing times and in relation to an evolving educational project? Where has it fallen short? What has been overlooked? The group's approach has been founded on the assumption that UCSC's extraordinary physical setting and the university's educational vision are inseparable.

The campus, praised by all for its beauty, remains in a continuing process of adaptation, negotiating inherent tensions and contradictions in changing historical moments. A tradition as well as an essential resource, it needs to be critically understood, and celebrated.

An Uncommon Place: Shaping the UC Santa Cruz Campus is the first result of their efforts. Combining seldom seen architectural drawings and photographs with remarks from participants and observers of campus development, the exhibition traces decisive moments in the early creation of UC Santa Cruz's built environment and the visions that shaped the campus.

The exhibition evokes paths taken and not taken in the first decades of campus development: decisions, constraints, hopes, realities. It celebrates the achievement of UC Santa Cruz's founding planners who married an extraordinary physical site with an innovative educational project and it analyzes the tensions and contradictions the founders built into the campus. Through its many subsequent transformations, the university that took shape on rugged forested terrain atop a high hill, remains an uncommon place.