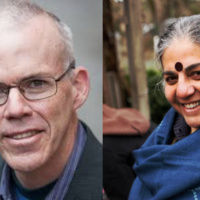 “The arc of the moral universe is long, but it bends toward justice.”

Before the coronavirus pandemic, we already knew social transformation was necessary. Now we know it’s possible. Political and economic policies that were previously fringe are now front and center in national and international conversations. In the last months, we’ve witnessed people taking to the streets to protest authoritarian governments, racial injustice, unequal health care, and climate change. We're witnessing an outbreak of politics that cannot be contained. These “silver linings” are situated within a context of growing inequality, war, authoritarianism, violence, poverty, hunger, and the potential to undermine the Earth’s support systems through the loss of biodiversity, clean water, and a stable climate.

For decades, Vandana Shiva and Bill McKibben have used their moral imaginations to envision a better world, articulate a global agenda for sustainable societies, advocate for policy advancements, and support social movements. Join Shiva and McKibben to imagine the future from the perspective of people and the planet, including a look at what Green New Deal & Just Recovery programs could help seed around the world in terms of livelihoods, human rights, and the environment.

Bill McKibben is one of the world’s leading environmentalists. He has been an influential author and educator for 30 years, and his 1989 book The End of Nature was one of the first-ever books written to inform a general audience about climate change. Over the last ten years, he initiated and built the first planet-wide, grassroots climate change movement. With the organization 350.org at its core, this movement has spread awareness and mobilized political support for urgent action to mitigate the climate crisis that is already unfolding.

Vandana Shiva is a globally recognized intellectual and activist who has shown ongoing commitment in different fields, making it difficult to label her name under a precise and unique category. At the core of her activism are: counter-development in favor of people-centered, participatory processes; support to grassroots networks; women's rights, and ecology. Author of numerous important books and articles, Vandana Shiva has shown a lifetime interest in campaigning against genetic engineering and the negative impact of globalization, advocating for the crucial importance of preserving and celebrating biodiversity.