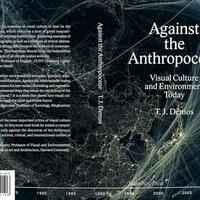 On October 17, T.J. Demos, Anna Tsing, and Jennifer Gonzalez will be in conversation to launch UCSC History of Art and Visual Culture Professor Demos' new book: Against the Anthropocene: Visual Culture and Environment Today.

Addressing the current upswing of humanities-based, scientific and environmental arts and attention in relation to the recent proposition that we have entered a new human-driven epoch called the Anthropocene, this new book by cultural critic and art historian T.J. Demos presents a critical overview of that thesis, and its limitations in conceptualisation and in practice.

To democratise decisions about the world's near future, Demos proposes that we urgently need to subject the Anthropocene thesis to critical scrutiny and develop creative alternatives in our precarious present -- which is the ultimate goal of Against the Anthropocene.

T.J. Demos is Professor in the Department of the History of Art and Visual Culture, University of California, Santa Cruz, and Founder and Director of its Center for Creative Ecologies. He writes widely on the intersection of contemporary art, global politics, and ecology and is the author of Decolonizing Nature: Contemporary Art and the Politics of Ecology(Sternberg Press, 2016); The Migrant Image: The Art and Politics of Documentary During Global Crisis (Duke University Press, 2013) and Return to the Postcolony: Spectres of Colonialism in Contemporary Art(Sternberg Press, 2013). A member of the editorial boards of Third Text and Grey Room, Demos co-curated Rights of Nature: Art and Ecology in the Americas, at Nottingham Contemporary in January 2015, and organised Specters: A Cine-Politics of Haunting, at the Reina Sofia Museum in Madrid in 2014.

Anna Tsing is Professor of Anthropology at UC Santa Cruz, as well as the Neils Bohr Professor in the School of Culture and Society at the Aarhus University in Denmark. She is also the acclaimed author of many titles including Friction: An Ethnography of Global Connection, In the Realm of the Diamond Queen, and Mushroom at the End of the World. Professor Tsing earned her bachelor's degree from Yale University and her Ph.D. from Stanford University. In 2010 she won a Guggenheim Fellowship and in 2011 she received a Martin M. Chemers Award for Outstanding Research in the Social Sciences Division.

Jennifer Gonzalez is Professor in the History of Art and Visual Culture at the University of California, Santa Cruz, and also teaches at the Whitney Museum Independent Study Program, New York. She has received fellowships from the Ford Foundation, the American Association of University Women, and the American Council of Learned Societies. She has published in Frieze, Bomb, Diacritics, Camera Obscura, Open Space and Art Journal. Her first book Subject to Display: Reframing Race in Contemporary Installation Art (MIT Press, 2008) was a finalist for the Charles Rufus Morey Book Award. Her second book, Pepon Osorio was published by University of Minnesota Press (2013).

Against the Anthropocene: Visual Culture and Environment Today is available to purchase through the Sternberg Press website.

This event is open to the public. Metered parking is available in the Performing Arts Lot.