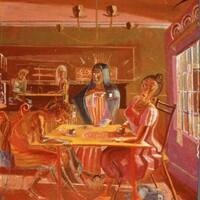 This virtual exhibition showcases the breadth of Eduardo Carrillo’s work, spanning from his early career after his studies at UCLA, to his later life living in Santa Cruz, comprehensive across oil and watercolor media.

About Eduardo Carrillo
Eduardo Carrillo was a beloved friend, artist, and active member of the Santa Cruz community. Before his passing in 1997, Carrillo worked as a professor of art at UC Santa Cruz, bringing spirit to every studio and inspiring the budding artists he worked with. He believed in merging traditional techniques with contemporary flair in his own work and his teachings–forming this artistic praxis of Califas: two worlds brought together by envisioning a richly transcultural and equitable future.