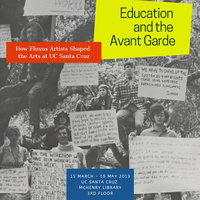 Education and the Avant Garde: How Fluxus Artists Shaped the Arts at UC Santa Cruz

Learn how UC Santa Cruz students and faculty in the late 1960s took inspiration from avant-garde artists as the fledgling campus debated the shape of arts education!

A spirit of experimentation and participation, as championed by artists of the Fluxus movement, influenced a number of campus endeavors during this period. This exhibit uses documents, artifacts, and printed works to reveal stories about this transformational creative moment in campus history, including the founding of College Five, the creation of a futuristic comic book-influenced production of Shakespeare’s Julius Caesar, and the creation of an ambitious and collaborative year-long experience in which students and visiting artists worked alongside faculty to define the future of arts on campus.

Open to the public during all normal McHenry Library hours.