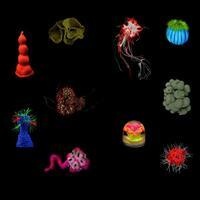 "Crocheting the Chthulucene"
Donna Haraway in conversation with the co-creators of the Crochet Coral Reef Project, Christine and Margaret Wertheim.

The Crochet Coral Reef is an SF story of string figures, science fact, science fiction, stitched fantasies and speculative fabulation. This hyperbolic reef is material, figurative, collaborative, tentacular, worldly, dispersed within the tissues and across the surfaces of terra, playful, serious, mathematical, artistic, scientific, fabulous, feminist, exceeding gender, and multispecieist. Its story is brave--actually making--real and fabulated things together in order to open up still possible times for flourishing on a diverse earth.

Join Haraway and the co-creators of the Crochet Coral Reef project in lively conversation about these facts, fictions, and fantasies.

Christine Wertheim is a poet-performer-artist-critic-curator-crafter-teacher-and-collaborator. She is currently on the faculty at the School of Critical Studies at the California Institute of the Arts. Margaret Wertheim is a science communicator and curator who focuses on the relation between science and the wider cultural landscape. Together, they are the founders of the Institute For Figuring in Los Angeles, an organization dedicated to the aesthetic and poetic dimensions of science and mathematics, including the Crochet Coral Reef -- the biggest participatory art/science project in the world. The IFF has had solo shows at NYU Abu Dhabi, the Smithsonian, Science Museum Dublin, Hayward Gallery London, Museum Kunst der Westkust Fohr, Art Center Pasadena, Track 16 LA, New York University NY, New York Financial Center, and the Chicago Cultural Center.

Donna Haraway is a Distinguished Professor Emerita in the History of Consciousness and Feminist Studies Departments at UC Santa Cruz. She is a prominent scholar in the field of science and technology studies and the author of numerous books and essays that bring together questions of science and feminism, such as A Cyborg Manifesto: Science, Technology, and Socialist-Feminism in the Late Twentieth Century (1985) and Situated Knowledges: The Science Question in Feminism and the Privilege of Partial Perspective (1988). In September 2000, Haraway was awarded the highest honor given by the Society for Social Studies of Science, the J.D. Bernal Prize, for lifetime contributions to the field.

Event is Free and open to the public.