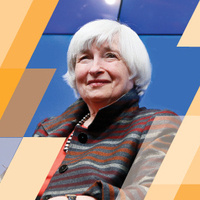 Janet Yellen is widely regarded as one of the most successful Federal Reserve chairs in history. During a period when economic policy could have reflected the rancorous partisanship of the political climate, her leadership modeled a steady, patient, balanced approach, with a willingness to take informed risk. The UC Santa Cruz Foundation Medal recognizes individuals of exceptionally distinguished achievement whose work and contribution to society exemplify the vision and ideals of the University of California at Santa Cruz.

The evening will include a dynamic conversation between Janet Yellen and Carl Walsh, UC Santa Cruz distinguished professor of economics and an expert on central banking and monetary policy.

NEW: This event is available for viewing via live stream.