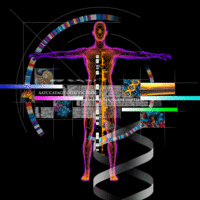 Hear about this landmark accomplishment from David Haussler and join us in a toast.

The Human Genome Project got a powerful boost from David Haussler and his team at UC Santa Cruz in 2000.

Without their work, the world's scientific community would not have the unrestricted access to the human genome it does today. They stepped in at a critical juncture, when the public consortium faced the task of assembling 400,000 similar-looking, overlapping, non-contiguous DNA segments into the human genome. A private company, Celera Genomics, had announced its intention to assemble the human genome sequence in advance of the public effort.

Motivated to keep the human genome accessible to researchers everywhere and prevent significant portions of it being locked up in patents, Haussler's team raced the clock. Due to the heroic efforts of then graduate student Jim Kent, who programmed 10,000 lines of code in 4 weeks, they succeeded in assembling the first working draft of the human genome. They then posted it on the Internet, ensuring it would remain in the public domain for all time.

From that original posting, Haussler and his team developed one of the most important and beloved resources in biology: the UCSC Genome Browser, which is directed by Jim Kent. The browser now aligns the human genome to more than 90 species, including important model organisms and offers a wealth of information about each one.