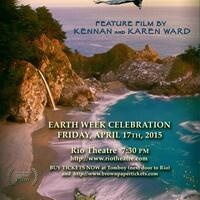 IT'S A WILD LIFE

The Santa Cruz premiere of "It's a Wild Life" by UC Santa Cruz alumnus Keenan and Karen Ward.

Filmmakers Kennan and Karen Ward present the Santa Cruz premiere of their first feature length film "It's A Wild Life." Filmed in the mountains and coast of Big Sur, the film captures the majestic beauty of the land and its inhabitants.

A graduate of the UC Santa Cruz Environmental Studies program ('79), Kennan combines his knowledge of nature, keen eye, and obvious love of the Big Sur region to produce the film, which was six years in the making. The film follows the main characters deeply influenced by this place. Wildlife includes bobcats, hummingbirds, and the magnificent California condors.

Showtime: 7:30pm Doors open: 7:00pm Tickets ar available online at Brown Paper Tickets or at Tomboy (Next to the Rio.)