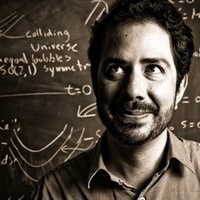 Kraw Lecture with Anthony Aguirre: Where Did it All Come From, and Where is it All Going?

Unable to join us in person? Live stream the talk here.

The physical universe, Aguirre will argue, is made of matter (or energy) and of order (or information). Aguirre will trace the 13.8 billion year history of this matter/energy told by modern cosmology, as it has developed into ever-more sophisticated order and structure: galaxies and their arrangement, stars, planets, life, and very recently and locally, civilization.  The survival of civilization — and life itself — through the coming century is not assured, but if it continues, what could its future look like over thousands or millions of years?  No one knows, but touring topics from fundamental physics to the nature of intelligence, Aguirre will lay out some of the possibilities.

Physicist Anthony Aguirre studies the formation, nature, and evolution of the universe, focusing primarily on the model of eternal inflation—the idea that inflation goes on forever in some regions of universe—and what it may mean for the ultimate beginning of the universe and time.