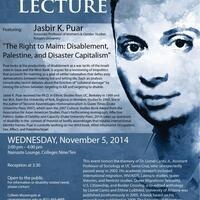 "The Right to Maim: Disablement, Palestine, and Disaster Capitalism"

This talk looks at the productivity of disablement as a war tactic of the Israeli state in Gaza and the West Bank. It argues for a revisioning of biopolitics that accounts for maiming as a goal of settler colonialism that defies easy demarcations between making live and letting die. Such an analysis complicates recent debates about the function of "collateral damage" by mining the schism between targeting to kill and targeting to disable.

Puar is the author of Terrorist Assemblages: Homonationalism in Queer Times (www.dukeupress.edu/Terrorist-Assemblages/) (Duke University Press 2007), which won the 2007 Cultural Studies Book Award from the Association for Asian American Studies. Puar's forthcoming monograph, Affective Politics: States of Debility and Capacity (Duke University Press, 2014) takes up questions of disability in the context of theories of bodily assemblages that trouble intersectional identity frames.

Puar is currently working on her third book, titled Inhumanist Occupation: Sex, Affect, and Palestine/Israel as a 2013-14 Society for the Humanities Fellow at Cornell University.

This event honors the memory of Dr. Lionel Cantu Jr., Assistant Professor of Sociology at UC Santa Cruz, who unexpectedly passed away in 2002. His academic research included international migration, HIV/AIDS, Latina/o studies, queer theories, and feminist studies. Queer Migrations: Sexuality, U.S. Citizenship, and Border Crossing, a co-edited anthology by Lionel Cantu and Eithne Luibheid, University of Arizona was published posthumously in 2005. A book based on his research was published in 2009, The Sexuality of Migration: Border Crossings and Mexican Immigrant Men, by Lionel Cantu, co-edited by Nancy Naples, Professor of Sociology & Women's Studies at the University of Connecticut and Salvador Vidal-Ortiz, Assistant Professor of Sociology at American University (nyupress.org/books/9780814758496/) (New York University Press, February 2009).

Free and open to the public Reception at 3:30