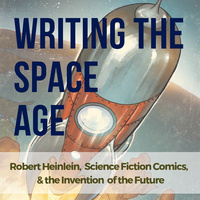 Writing the Space Age: Robert Heinlein, Science Fiction Comics, and the Invention of the Future is an exhibit exploring how science fiction books, magazines, and comics created and consumed during the rise of the Space Age sparked the public’s imagination and inspired scientists, writers, and fans to invent the futures they imagined.

Pick up a copy of the University Library's free comic book at the exhibit. Published especially for this exhibit: Rocketship Lunatic, it reimagines a classic novel by Robert Heinlein (Rocketship Galileo) as an adventure tale in which Heinlein himself participates in a rocket launch!

Open to the public during all normal McHenry Library hours.