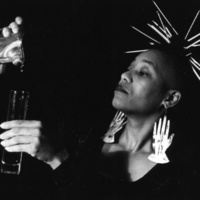 This performance is sponsored by the Institute of the Arts and Sciences for the 2021–2022 Media and Society Lecture Series, Kresge College, and is part of the Surge: Explorations in Afrofuturism series.

ADMISSION
Attend in person.
This is an off-campus event.
Free and open to the public.
Registration details to be announced.

Pamela Z has toured extensively throughout the United States, Europe, and Japan – performing in international festivals and venues including Bang on a Can at Lincoln Center (NY); La Biennale di Venezia; San Francisco Symphony’s SoundBox, the Japan Interlink Festival; Other Minds (San Francisco); and Pina Bausch Tanztheater's Festival (Wuppertal, Germany). Her large-scale, performance works have been presented at venues like the Kitchen in New York, Yerba Buena Center for the Arts, Theater Artaud (Z Space) in San Francisco, the Museum of Contemporary Art in Chicago, as well as at theaters in Washington D.C. and Budapest. She has shown work in exhibitions at the Whitney Museum (New York); Savvy Contemporary (Berlin); the Tang Museum (Saratoga Springs NY); the Dakar Biennale (Sénégal); Krannert Art Museum (IL), and the Kitchen (NY). Ms. Z has received commissions from chamber ensembles including Kronos Quartet, Eighth Blackbird, Bang On A Can All Stars; Ethel, Del Sol Quartet, California E.A.R. Unit; Left Coast Chamber Ensemble; and Empyrean Ensemble. She is the recipient of many honors and awards including the Rome Prize, the United States Artists fellowship, the Guggenheim Fellowship, the Doris Duke Artist Impact Award, a Robert Rauschenberg Foundation residency, the Herb Alpert Award in the Arts; the Creative Capital Fund; the MAP Fund, the ASCAP Music Award; an Ars Electronica honorable mention; and the NEA Japan/US Friendship Commission Fellowship. She holds a music degree from the University of Colorado at Boulder. For more information visit: www.pamelaz.com

Kyle Bruckmann is an oboist and electronic musician who tramples genre boundaries in widely ranging work as a composer/performer, educator, and New Music specialist. His creative output – extending from conservatory-trained foundations into gray areas encompassing free jazz, post-punk rock, and the noise underground – can be heard on more than 100 recordings from labels such as New World, Hat Art, Carrier, New Focus, Entr’acte, Not Two, Clean Feed, Another Timbre, 482Music and Sick Room. He has performed and/or recorded with Creative Music progenitors Roscoe Mitchell, Anthony Braxton and George Lewis, and worked as a sideman for bandleaders such as Lisa Mezzacappa, Guillermo Gregorio, Andrew Raffo Dewar and Myra Melford. Current ensemble affiliations include Splinter Reeds, San Francisco Contemporary Music Players, Eco Ensemble, Quinteto Latino, sfSound, and the Stockton Symphony; the most significant projects he has led or collaboratively founded include Degradient, EKG, Lozenge, and Wrack. He is Assistant Professor of Practice in Oboe and Contemporary Music at University of the Pacific, and also teaches at UC Santa Cruz, Davis and Berkeley.

Alex Wand is a composer interested in folk music, ecology, social practice art, tuning systems, field recording, and dance/multimedia collaborations. His music has been described as having “melody lines that can circle through one’s head for days after listening, begging to be rewound and re-listened and timbres and layers that are supremely joyful and poignant and at times absolutely laid bare in their sincerity” (New Classic LA). He performs with groups such as Desert Magic and the Grammy Award-winning Partch Ensemble, and his music can be heard on MicroFest Records, Bridge Records, Hungry Badger, and Frog Peak Music (A Composers’ Collective). He studied music at the University of Michigan and at California Institute of the Arts, and is currently pursuing doctoral studies in music composition at UC Santa Cruz.

Odeya Nini is a Los Angeles based experimental vocalist and contemporary composer. At the locus of her interest is performance practices, textural harmony, gesture, tonal animation, and the illumination of minute sounds, in works spanning chamber music to vocal pieces and collages of musique concrète. Odeya's work has been presented at venues and festivals across the US and internationally, such as The Broad, REDCAT, Joyce Soho, MONA and Art Basel Miami, from Los Angeles to Tel Aviv, Australia, Mongolia, Madagascar and Vietnam. She also leads sound healing meditations and workshops exploring the healing qualities of embodying the voice.

Archie Carey is a bassoonist and composer living in Los Angeles. Archie has presented his own work at REDCAT, The Portland Art Museum, Los Angeles County Museum of Art, The Hammer Museum, SOMArts, and many other spaces and places throughout the US, Germany, Vietnam, Israel, and Iceland. His work as a composer aims to magnify sound, pitch, timbre, and environment to make the subtlest details a point of focus, creating a meditative space for both listener and performer. Archie is a founding member of wild Up, and The Joshua Trio, and has performed regularly with The Dogstar Orchestra, The Vinny Golia Large Ensemble, and other adventurous music groups in and around Los Angeles.

Brock Stuessi is a musician and aspiring archivist currently residing in Los Angeles. His current music projects are Neap, a duo formation with saxophonist Kurtis Shaffer exploring improvisation, trance, and ambient forms, and solo work for guitar, synthesizer and voice. In addition to music making, Brock also runs the Hungry Badger record label and press where he releases music and songbooks with friends. He holds a BA in Music from Northwestern University, an MA in Ethnomusicology from UC Santa Cruz, and is currently working on his MS in Library and Information Science at the University of Illinois, Urbana-Champaign.

Vanessa Ruotolo serves as a lecturer in music, in cello, at the University of California-Santa Cruz. She received her musical training from the New England Conservatory, Boston University (B.M.) and San Francisco Conservatory of Music (M.M).She is concurrently affiliated with Santa Rosa Symphony, Pacific Chamber Orchestra, Midsummer Mozart Festival Orchestra, Skywalker Sound Orchestra & Shorenstein Hays Nederlander. As founding member of The Rhythm Sisters, a String Quartet dedicated to outreach, Vanessa has scripted and performed educational shows for thousands of children and families throughout California. Vanessa has recorded with New World and Other Minds Records. She enjoys playing a wide variety of music, having performed with numerous Broadway shows in San Francisco and on U.S. tours, recorded for several motion pictures and popular video games with Skywalker Sound Orchestra and shared the stage with popular musicians including Stevie Wonder, Mary J. Blige, Jay-Z, Donna Summer, Ray Charles and Andrea Bocelli, to name a few.

Seth Glickman is a composer, multi-instrumentalist performer, and creator of music-related technologies. His orchestral and chamber works have premiered in Paris, New York, and Pittsburgh, PA. His scores for the acclaimed documentary film, Haenyeo, and award-winning game, Rosenstrasse, highlight the variety in his collaborations. His Music Everywhere augmented reality piano experience was featured at the NIME conference, and won the grand prize in Microsoft and Unity’s HoloLens Developer Competition. Seth received his master’s degree from Carnegie Mellon University and is currently a DMA composition student at UC Santa Cruz.

William Winant is a Grammy nominated percussionist whoi has performed with some of the most innovative and creative musicians of our time, including John Cage, Iannis Xenakis, Keith Jarrett, Anthony Braxton, James Tenney, Cecil Taylor, George Lewis, Steve Reich and Musicians, Yo-Yo Ma, Frederic Rzewski, Ursula Oppens, Joan LaBarbara, Annea Lockwood, Joelle Leandre, Oingo Boingo, Mr. Bungle, Sonic Youth, and the Kronos String Quartet. ​​He has made over 200 recordings, covering a wide variety of genres. His recording of Lou Harrison's "La Koro Sutro" (which he produced for New Albion Records) was the New York Times Critic's Choice for best contemporary recording of 1988. In 1999 he produced a recording of music by 20th-century avant-garde composers with the influential rock band Sonic Youth; "Goodbye 20th-Century" (SYR4), was hailed by both The Los Angeles Times and New York's Village Voice as one of the best compendiums of this type of music ever recorded. In 2016, Winant was awarded a large unrestricted grant from the Foundation for Contemporary Arts in recognition for his groundbreaking work as a contemporary percussionist. He is principal percussionist with the San Francisco Contemporary Music Players. In 2014 he received a Grammy nomination for his recording of John Cage’s historic solo work, 27' 10.554" for a percussionist, on Micro Fest Records. ​​He performs frequently with the San Francisco Contemporary Music Players, and is a member of the faculty at UC Santa Cruz.

*    *    *    *    *
ABOUT THE SERIES
​This event is part of Surge: Explorations in Afrofuturism, a multidimensional and transcultural month-long festival on Afrofuturism spearheaded by composer/performer Karlton Hester, choreographer Gerald Casel, and artist Aaron Samuel Mulenga. Afrofuturism is a global artistic and social movement, intent on imagining a world where African-descended peoples and cultures can live and flourish. Surge features music and dance performances, film screenings, and discussions to creatively engage Afrofuturist strategies for liberation and the restructuring of society free of racism.