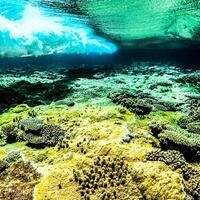 Hofagie Laamle (or "One People One Reef" in Ulithian) illustrates one community combating climate change in one of the most remote places on earth--the far outer islands of Micronesia. This short documentary film by Kelsey Doyle artfully combines the atmosphere of life on the Ulithi Atoll, the science behind the work, and the strength of the community. The film captures severe weather-event survival stories from the outer islanders and how the process of integrating marine biology and tradition can change the way the western world thinks about coral reef conservation.

Join us as Hawks Peak Productions celebrates the release of Hofagie Laamle with a screening and discussion on trailblazing marine conservation in the face of climate change. Join filmmaker, Kelsey Doyle, and marine biologist, Nicole Crane, as they discuss and present their film for this unusual Science Sunday.