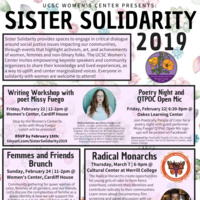 Sister Solidarity provides spaces to engage in critical dialogue around social justice issues that our communities face. This series of events highlight activism, art, and achievements of womxn, femmes and non-binary folks. The Women’s Center invites empowering keynote speakers and community organizers to share their knowledge and lived experiences, as a way to uplift and center marginalized voices. Everyone in solidarity with womxn are welcome to attend!

Meliza Bañales aka Missy Fuego is an author, curator, performer, advocate, academic, & cultural critic originally from Los Angeles. She is the author of three books and was a Lambda Literary Finalist in 2016 for LGBT Debut Fiction as well as short-listed for "Best Of" lists in Bustle, Buzzfeed, and Autostraddle. Her work has been anthologized for the past 23 years, including the Encyclopedia Brittanica of Activism & Social Change; Without a Net: The Female Experience of Growing-Up Working-Class; Baby, Remember My Name: New Queer Girl Writing; and Word Warriors: 35 Women Leaders in the Spoken-Word Movement. She was a fixture in the Spoken-Word, Slam, and Queer artist communities of the San Francisco Bay Area from 1996-2012 where she was on three national poetry slam teams as well as grand slam champion in 2002, a Legend of Slam in 2014, and toured with Sister Spit & Body Heat. Her short films have been official selections at Frameline, Outfest, Cherie! Cherie! Paris LGBT Film Festival and she won the Jury Award at the LA Transgender Film Festival in 2011. She received her BA with Honors in Literature, Creative Writing from UC Santa Cruz (as a Porter alumni) in 2000 and earned her MA in English & MFA in Poetry from San Francisco State University in 2003. She has served as a Professor in the Literature department at UC San Diego since 2015 and is writing a fourth book, Adventure Awaits You In Hell, a manifesto of survivorship.


February 24
Femmes & Friends Brunch
11-2pm @ Women's Center
RSVP by February 18: tinyurl.com/SisterSolidarity2019
Community gathering for queer womxn of color, femmes of all genders, and our friends. Let's discuss the complexities of femme as a queer identity & how we can support the femmes in our lives. We will have crafts & a photo booth! Wear your best brunch attire or come as you are. Food will be provided.