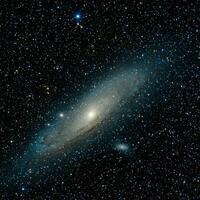 State of the Universe Report with Professor Emeritus Joel Primack

This lecture will discuss the current understanding and the latest discoveries regarding cosmology – the science of the universe as a whole – and galaxies and planets. There is overwhelming evidence that most of the density of the universe is invisible dark matter and dark energy, with atomic matter making up only about five percent of cosmic density. UCSC cosmologists helped to create the standard modern cosmological theory — but the latest high-precision measurements have revealed potential discrepancies that may require new physics. Galaxies were long thought to start as disks of gas and stars, but observations by Hubble Space Telescope show that most galaxies instead start pickle shaped. More massive galaxies have massive black holes at their centers, and matter falling onto these black holes causes outflows of energy that can strongly affect their host galaxies. Information about planetary systems is growing rapidly with new observations, and our own solar system seems increasingly to be unusual.