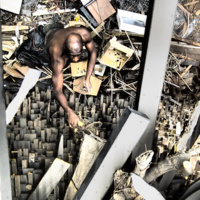 Contemporary artist Leonardo Drew, celebrated for jagged, tactile artworks that are rich in historical and cultural references, and art collector Jordan D. Schnitzer discuss "Number 215B, 2020," Drew’s large-scale installation currently on view at the Santa Cruz Museum of Art & History (MAH) as part of the Strange Weather: From the Collections of Jordan D. Schnitzer and His Family Foundation from April 14–August 14, 2022.

*    *    *    *    *
ADMISSION
Attend in person.
Registration is required here
This event is included with admission to the museum, which is free for MAH members and for UCSC students, staff, and faculty.

*    *    *    *    *
ABOUT THE SPEAKERS
Leonardo Drew is known for creating reflective abstract sculptural works that play upon the dystopic tension between order and chaos. Recalling Post Minimalist sculpture that alludes to America’s industrial past, as well as the plight of African Americans throughout U.S. history. One could find many meanings in his work, but ultimately the cyclical nature of life and decay can be seen in his grids of transformed raw material to resemble and articulate entropy and a visual erosion of time. Drew’s natural talent and passion for art was recognized at an early age, first exhibiting his work at the age of 13. He went on to attend the Parsons School of Design and received his B.F.A. from the Cooper Union for the Advancement of Science and art in 1985. His works have been shown nationally and internationally and are included in numerous public and private collections. Public institutions include the Metropolitan Museum of Art, New York; The Guggenheim, The Museum of Contemporary Art, Los Angeles; The Hirshhorn Museum and Sculpture Garden, Washington, D.C.; and Tate, London, among others, as well as collaborating with Merce Cunningham on the production of “ Ground Level Overlay.”  New York Times art critic Roberta Smith describes his large reliefs as “pocked, splintered, seemingly burned here, bristling there, unexpectedly delicate elsewhere. An endless catastrophe seen from above. The energies intimated in these works are beyond human control, bigger than all of us”.  He currently lives and works in Brooklyn, New York.

Jordan D. Schnitzer bought his first work of art from his mother’s Portland, Oregon, contemporary art gallery at age 14, marking an early beginning to his lifelong vocation as a collector. Today, his collection exceeds 19,000 works and includes many of today’s most important contemporary artists. It has grown to be the country’s largest private print collection. He and His Family Foundation generously lend work from the collections to qualified institutions and has organized over 110 exhibitions and has art exhibited at over 160 museums. Schnitzer is also President of Harsch Investment Properties, a privately owned real estate investment company based in Portland, Oregon, which owns and operates over 28 million square feet of office, multi-tenant industrial, multi-family, and retail properties in six western states.

*    *    *    *    *
ABOUT THE EXHIBITION
Strange Weather: From the Collections of Jordan D. Schnitzer and His Family Foundation features contemporary art works which illuminate and reframe the boundaries of bodies and the environment. The artworks included in the exhibition span five decades, from 1970–2020, and are drawn together for how they creatively call attention to the impact and history of forced migrations, industrialization, global capitalism, and trauma on humans and the contemporary landscape.

Group
Arts Division, Institute of the Arts and Sciences
Hashtag