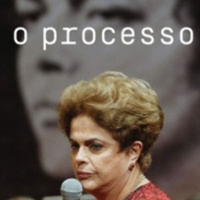 Screening of The Trial and conversation with filmmaker Maria Augusta Ramos

This film screening of The Trial is free and open to the public. After the film, the filmmaker will answer questions about social justice filmmaking.

Brazil is undergoing the deepest political crisis of its recent history following the deposition in 2016 of ifs first female president, Dilma Rousseff. The Left in Brazil and abroad have deemed the impeachment process an institutional coup d’état where lawfare has been deployed to destabilize the country’s democracy and undermine its sovereignty. The imprisonment of former President Lula in April 2018 is the most recent development in the process of blocking the Workers’ Party from power. The acclaimed documentary The Trial, directed by Maria Augusta Ramos, offers a behind-the-scenes look at Rousseff’s impeachment trial and the struggle to prove the President’s innocence against a majority vote by a Congress riddled with corruption and misogyny.

Having received a 7-minute standing ovation in its world premiere at the Berlin Film Festival, The Trial has been described by journalist Brian Mier as “a powerful document of a profound injustice which has sent a country backwards on a dangerous course, a film that will live forever as a self-contained record of Brazil’s 2016 Coup d’état.” For Stephanie Dennison, professor of Brazilian Studies at the University of Leeds, “The Trial is an incredibly powerful piece of filmmaking and an indispensable document of turbulent political times. The courage demonstrated by filmmakers such as Maria Ramos gives me hope and a real sense of purpose in what for me, and many of my fellow Brazilianists, otherwise feels like pretty dark days.”

Maria Augusta Ramos is an award-winning Brazilian-Dutch filmmaker. She was born in Brasília, Brazil in 1964 and graduated in documentary film at the Netherlands Film and Television Academy in Amsterdam. In 2013, the Board of the Helsinki Foundation for Human Rights awarded Maria Ramos the Marek Nowicki Prize for her body of work and excellent achievement in showing human rights in film. To learn more about Maria Augusta Ramos, visit https://www.maria-ramos.com/maria-augusta-ramos/