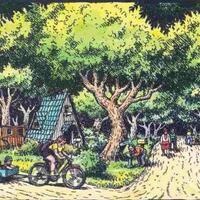 Utopian Dreaming: 50 years of Imagined Futures in California and at UCSC--November 6-7, 2015

In 2015, UCSC is celebrating its 50th anniversary, and Ernest Callenbach's Ecotopia its 40th. Both are products of a fertile period of ferment across California, during the 1960s and 1970s. Why has California been such a fertile and fruitful site for "Utopian Dreaming," in film, fiction, media, design, architecture, mobility, electronics, intentional communities,ecology and environment, counter-culture and social movements? What kinds of futures has California come to represent? What has been the role of UCSC in these imaginaries of the future. Does California remain a Promised Land, or is it a Land of Squandered Promise?

On November 6th and 7th, join scholars, students, observers and utopian dreamers , in a conference that celebrates those anniversaries and explores visions of the future that have emerged from California and UCSC about California and UCSC. Presentations will run the gamut from Ecotopia to Technodystopia, from the real to the fantasized, from the past to the future, assessing the impacts of utopian imaginaries on culture, politics, environment, cities, beliefs and ideologies at UCSC, across California, and beyond.

Admission is free, but please register for the conference at http://tinyurl.com/pk3sko6 For questions and information, please contact Ronnie Lipschutz, rlipsch@ucsc.edu (email preferred) or 831-459-3275/459-2543.