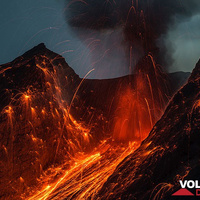 Volcanism as the re-creation of Earth - Jim Gill

Volcanoes have both immediate and remote significance - immediate when they erupt, and remote because they are a primary mechanism of planetary change. The eruptions are a kind of planetary recreation, and generating magma re-creates the Earth. My talk will explore both aspects, and be illustrated. Eruptions, and the volcanoes that they create, differ because the magmas that erupt are highly variable in composition because what melts (the source rock) is so variable. I will summarize eruptions, magmas, and sources from the three main volcanic regimes on Earth: mid-ocean ridges where tectonic plates are born; ocean islands where they are middle- aged; and subduction zones where they die. I will emphasize subduction zones (e.g., the Circum-Pacific Ring of Fire) because that is where I have spent most of my career, both on land and below the sea. Those magmas are unique to Earth, are the most explosive, create the most valuable metal deposits, and produce the continents on which we live. I will discuss their origin, their role in Earth evolution, and how they are studied in the field and laboratory.

Free and open to the Santa Cruz community.